Pats and Glads win barnburners, Lions live up to the hype

by admin
in Tournaments & Events

On a cold winter’s night, the BBL Championship heated up in the middle of the standings, as Plymouth City Patriots won a competitive game over the Surrey Scorchers at home 90-83. Isa Brandon was perfect from the floor with 16 points and 6/6 FG, and filled up the statsheet to lead the way with seven rebounds and five assists.

Meanwhile, the Caledonia Gladiators fired up a come-from-behind victory over the Newcastle Eagles at home 81-77, thanks to Jeremiah Bailey’s 28 points.

And as the evening drew to a close, the London Lions slowed Cheshire Phoenix’s winning momentum with a balanced attack and five players in double figures, winning away from home 74-89. Ovie Soko led the way with 12 points.

The last time the Surrey Scorchers travelled to Devon for a game against Plymouth City Patriots, they left at the end of a 91-68 defeat, but this time their return trip to Plymouth Pavillions was a much closer affair.

Surrey got out to an early lead, but by the time the sold-out South West crowd had found their seats and warmed up, Plymouth were hunting down their opponents’ lead.

Elvisi Dusha and James Hawthorne Jr helped take back control of the game for the Patriots. In the second quarter, they connected on a play that their namesake in New England would have appreciated – Dusha launched the ball the length of the court, and even though the Scorchers recovered two players on the defensive end, Hawthorne Jr out-leapt them all to recover and lay the ball in.

At the same time Isa Brandon was warming up. He hit both his threes in the first half, which was the start of a perfect afternoon.

True to their intent, Surrey were not letting this game get out of hand. In the third, Josh Jefferson, Ryan Martin and Quincy Taylor took it in turns to go on individual scoring runs and the lead was cut to one, but the Scorchers couldn’t quite break past even.

They gave another big push in the fourth on the backs of Kyle Carey, and some big threes from Andrew Lawrence and Jefferson, which closed the gap to two with less than two minutes in the game.

The crowd sensed the tension and loudly got behind the hometown heroes. The man who felt the rush more than most was Rashad Hassan, who had an incredible series of possessions with 80 seconds to go.

Dusha penetrated and dished it off to Hassan for a tough layup. He then ran hard down the court to get a massive block on a highlight worthy dunk attempt by Surrey’s Shakem Johnson, then Hassan out-paced everyone to receive a touchdown pass and get another easy two, which gave the home team a slight cushion.

A timeout from Scorchers coach Lloyd Gardner set up a good backdoor play that couldn’t be converted, but full court pressure forced the Patriots to turn it over and Jefferson got to the hoop for two points.

It became a tactical foul finish, with Surrey sending Plymouth players on the line to extend the game. It will have been frustrating to see the Patriots hitting them, but they will have come away from the West Country feeling better about the more competitive affair.

It hasn’t been the easiest start to the season for the Newcastle Eagles, as they look to rebuild after a San Antonio Spurs-like run of excellence in the BBL Championship. And they visited Glasgow to face the Caledonia Gladiators with a positive mindset.

Javion Hamlet was a big reason. His aggressive offence helped put the visitors up 11-6 before Gladiators coach Gareth Murray called his players into the huddle to adjust the strategy.

It worked, as they went on a 6-0 run. Then both sides traded baskets before finishing the first quarter with 17 apiece.

It was becoming a battle of the bigs as Caledonia’s Jeremiah Bailey took on any one-on-one match-up Newcastle offered up.

When he wasn’t backing down players in the post, the Gladiators were moving the ball well to get the likes of Ali Fraser barrelling down the lane with a beautiful assist from Princeton Onwas.

On the other end, veteran Eagles big Darius Defoe was matching this. He got downhill and muscled up a tough layup off the backboard when Ben Mockford passed the ball to him in rhythm.

Defoe showed his mastery of pace, as he hustled down the court for a semi-fast break a few possessions later. Slowing the pace slightly at the top of the key to receive the ball, this threw off his defender, and the big man burst to the bucket again, taking a big eurostep to the right for another layup.

Moments later Mockford burst down the lane in transition for a left-hand layup and was fouled to take the lead again on a successful free throw.

This gave Newcastle a slight lead, which they protected heading into the locker room.

It took a few minutes for both teams to get warm again as the snow fell outside the Emirates Arena, but the Gladiators’ gameplan was to push the pace.

The speed with which David Sloan got down the court was impressive. And a few possessions later Fraser Malcolm found Bailey open up ahead on the perimeter – he rose up and hit the three.

Increased pace can help scoring, but mistakes can be punished quickly. The Eagles made the most of Gladiators’ misses by pushing the ball up an empty court.

Danny Cohn dribbled from one end of the court to the other for an easy layup, and Hamlet scored in much the same way. Mockford was also left open on the perimeter and made Caledonia pay with a big three to retain the lead heading into the final frame.

It was good interior passing from the Caledonia bigs again that closed the gap to one.

The game became a defensive slugfest as both teams tightened up their strategy.

Caledonia forced Newcastle into a 24-second violation with five minutes to go, then Onwas scored a tough hook shot in the paint to tie the game.

They finally took the lead on a beautiful connection between Sloan and Patrick Tape, with the latter rising up for an alley-oop jam that ignited the Scottish crowd as they felt the momentum of their team building into the final minutes of the game.

Sloan hit a big three for Caledonia, followed by a much-needed mid-range jumper from Newcastle’s Defoe.

In the dying seconds, a play was designed for the mid-range specialist to take a step back behind the arc. Cohn drove into the lane and dished it off, then the captain sunk the big shot.

A timeout by Murray saw him draw up a great possession. Onwas found Sloan as he curled around a screen at the top, then stopped on dime but Newcastle’s Hamlet ran into him as the Gladiators guard rose for a long two. Sloan hit the free throw to put his team up four, and the win. 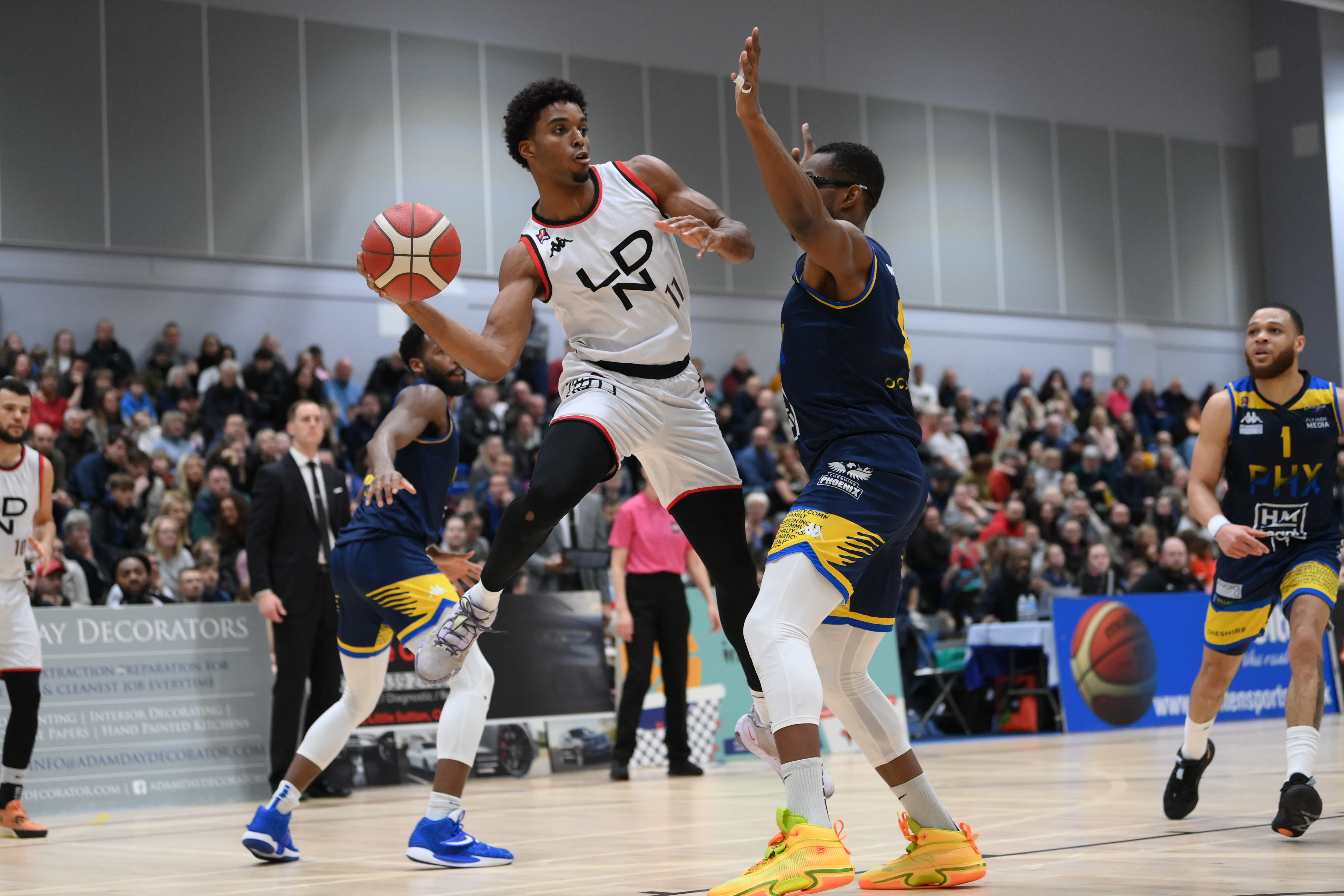 The success of the London Lions this season means that they enter any arena with a target on their back.

An example of this came from good defensive pressure by Cheshire’s Jamelle Anderson, who tipped a kick ahead pass. Marcus Evans hustled to stop the ball from bouncing out of bounds and recovered it while crashing into a sponsors board on the side of the court. The ball reached Tahjai Teague, who pushed it forward to a streaking Larry Austin for a 6-4 lead.

It was still early, but the Phoenix players were clearly there for a competitive contest.

The Lions roared back into action quickly and it was former NBA player Sam Dekker who lived up to his reputation. He got to the line, then made a big three-point shot to build a slight lead, thanks to a Vojtech Hruban assist.

Hruban showed he was more than just a passer with 40 seconds to go. With the ball above the perimeter, he used two screens to get an open three moving to his right.

A good defensive possession gave Ovie Soko the chance to get out in transition, but he held up the ball and Mo Soluade attacked to get a fadeaway shot off from mid-range. This gave the Lions an eight-point edge after 10 minutes.

After a breather, London opened up with a hand-off play for Soko, who duked his defender with a hesitation half-spin, before pivoting back to his strong hand for a good hook shot off the glass.

While the Lions were running good offence, it was the defence that helped them create a nine-point gap.

Cheshire needed a heroic shot from Teague as London help rotated into position to double him with the shot clock winding down in the second quarter. He bobbled the ball, but recovered it for a long-range prayer that hit nothing but net with two players in his face.

Each time the Lions pushed their lead, a big three from the Phoenix stopped the run, which was the case when Will Neighour hit a long range bomb.

That strategy started to dry up, however, when Neighbour and Teague missed two that led to fast break baskets to push the Lions’ lead to 14 before the end of the first half.

Cheshire head coach Ben Thomas spoke to the broadcast team at the half and said: “We’re giving them too many easy looks in the paint… we have to take them away.”

“We’ve only had six turnovers in the first half, so I don’t think that’s the problem. We’re not shooting a high enough percentage. They’re getting easy shots, and we’re working too hard for everything we’re getting.

“We know what we need to do. We’re a good defensive side, we need to get back to our ways.”

Unfortunately, it was a breakdown in defence that allowed the Lions to get the first bucket of the second half.

A well-executed play saw the London bigs rise to the top of the key. Aaron Best passed the ball to Luke Nelson and received a back screen from Kosta Koufos. With an open back door, Best flew through an open lane and received the alley-oop pass back from Nelson to dunk it with authority.

Despite this breakdown, Cheshire put together a series of good possessions, and scored back-to-back threes from Anderson and Jack, respectively, to stay within reach.

London started to grow the gap again, until Evans once again showed the heart and hustle that was on display in the opening few minutes. He took on Soluade full court and stole the ball away, but stayed composed as the London guard chased him back down court and got the basket plus the foul.

Cheshire continued to fight but the lead continued to grow, and by the fourth quarter, it had surpassed 20 points.

While there was hope from the home crowd throughout, the Lions lived up to the hype in Cheshire, and showed why the team is putting on a competitive display in Europe during the closing quarter, which included highlight reel dunks and plays.

Do you want to some of the highlights in person? CLICK HERE to buy tickets to a game near you.

Carmelo Anthony Unsure of His Future in the NBA

Carmelo Anthony Unsure of His Future in the NBA

Sako rises above all to scoop dunk contest honours

Kyle Lowry: “I have a very nice contract that can be moved”